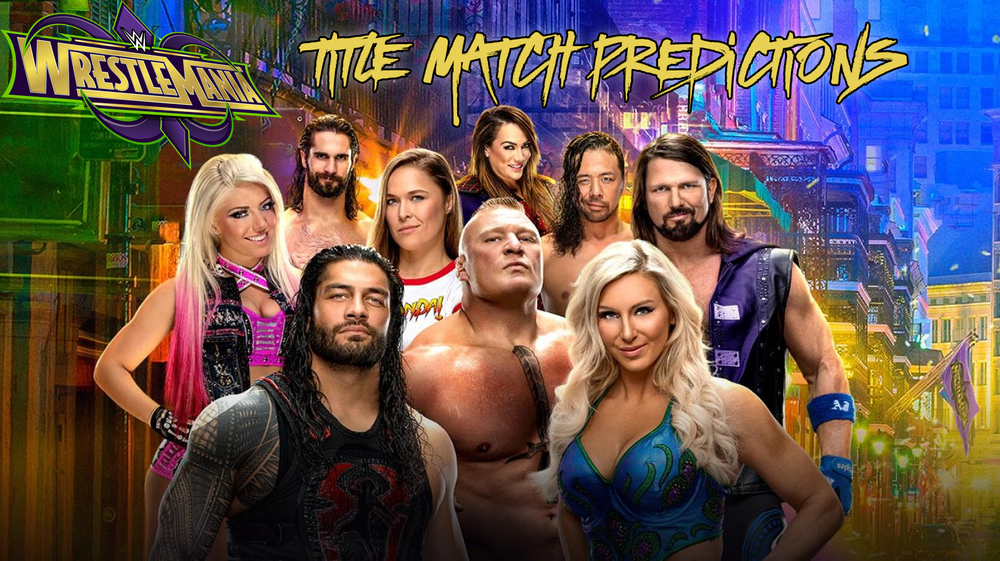 Anyway, here we go with all the predictions for all the title matches. Wooooooooooo!

PREDICTION: Well, we all know how this one is going to turn out. Brock is about to leave WWE to go back to UFC and it would appear that the deal is apparently done, so Brock may just simply throw this match in order for Roman to win. If I am totally wrong that he is not going anywhere, I still don’t see him winning. Roman is the guy in the WWE and Vince will do anything that he can to get Roman in the big spot light.

The only thing that is going to solve us hating Roman is by getting him to turn hell, but you know that it ain’t going to happen any time soon. Roman to win!

PREDICTION: Title vs Streak. This is a tricky once for a couple of reasons. Charlotte may be the person to break Asuka’s streak. Asuka may win the title and then  you have Carmella to think about (She is more than likely going to cash in tonight)

Both of these ladies have submissions as their weapons and they are not afraid to use them. Asuka could choke Charlotte out so it would be called off rather than being a tap out, but who knows. This should be a interesting match with some good story telling and I am looking forward to this. I want Asuka to win the SmackDown Women’s Championship.

PREDICTION: Right, let’s get this out of the way. As good as they are, I do not see Harper and Rowan gaining the tag titles…I don’t feel that this is the right time for them to have the titles. They are not ready. The New Day have a reason to win them…if they do, they would be a 5-time WWE World Tag Team Champions. The Usos are by far the best Tag Team in the WWE today. Their heel run is by far the best run that they have had in the company and I would hate to see them losing the titles to New Day…Maybe someone from NXT can take it off them at SummerSlam or something. Usos to retain.

PREDICTION: Well, this is a match I didn’t know I wanted. Balor, Miz and Rollins all in the same ring for the IC Title. This should be a fantastic, hard-hitting match and the previous feud that Rollins had with Balor should make this a good match to follow closely. It would be great if Finn Balor could actually win the title tonight as he NEEDS to have a title on him. Seth doesn’t need a title reign at the moment and in my opinion, I feel that Seth is doing OK where he is on the roster. He is in a good place! Finn Balor to win.

PREDICTION: Well, this was a singles match turned into a triple match, turned in a fatal 4-way. This would be Randy’s first defence of the title since he won the title back at the Fastlane PPV. Bobby Roode has really gotten better but is still suffering from that ‘post-NXT-bury’ that some of the superstars have been subjected to and doesn’t make them feel as ‘big’ as what they were back in NXT.

I am really happy to see Jinder Mahal in this match as he needs a rebound after losing the WWE Championship. He looks like he was buried to the bottom of the roster whenever he lost the title and hasn’t picked up steam again…so here is hoping that he has a good match. And then we turn our attention to Rusev.

Rusev is good. He is great and he has been a United States Champion (twice) and he is up against some good opponents which should make this match a highly-rated one. I would personally like to see Rusev Day (Wouldn’t it be great for Rusev to win the US Title on Rusev Day? :O ) – Rusev is a good foreign heel with some powerful moves and this I think that Rusev should win the US Title.

PREDICTION: This is also slated to be a good match as it is a feud that I have been looking at closely. Nia Jax has become a fantastic character in the last few months and while I am happy for her to have a title match at Wrestlemania, I feel that Alexa is going to retain,  BUT here is a curve ball and my overall prediction. Carmella is going to cash in her Money in the Bank contract, pin one of them and run with the title. Carmella is going to cash in and win.

PREDICTION: And here we have the match of the night. 205 Live has become the hottest brand in WWE (A very close 2nd behind NXT) and this match for the CW title is going to be the best match on the card in my opinion. These guys has been built brilliant and pushed to new heights. Drake Maverick seems to be a very good GM for 205 Live and I am excited where the show goes after Wrestlemania. Cedric Alexander to win the CW title!

And that is finally the predictions done. Apologies for the delay in getting this post out. Being busy and having the flu really put a dampner on things and prevented me from completing this, but alas it is done now.

I will be live tweeting tonight at 10pm with the pre-show and at 12pm for the main show. You can follow me on Twitter: @PFWressling